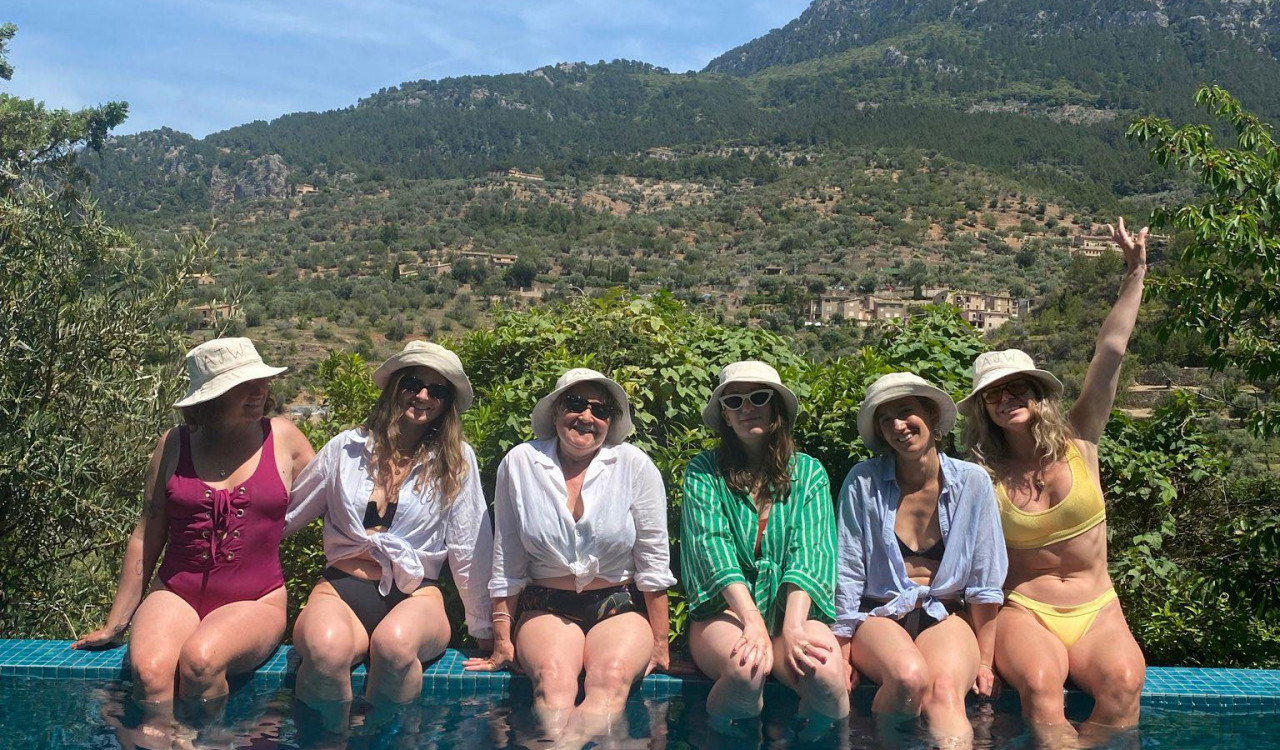 Earlier this year, in May 2022 – after a long winter of shielding and healing where I occupied an increasingly shrinking, but very safe-feeling world – I emerged, tentatively, into the sun. This process was facilitated in no small part by a group of bright, young women – my daughter’s closest and dearest friends, who collectively embraced me – and, taking a pun, invited me to join them on her hen weekend in Majorca.

I don’t know what I was expecting. My daughter is a very talented creative who designs beautiful pieces that adorn homes around the world. While her friends, at that point known to me only through references in conversations with her, also occupy that (sometimes rarefied) creative space where style, originality and chic seem to collide so effortlessly. A space that has always eluded me, it has to be said. I am more at ease in old jumpers, working in the garden or walking our dog.

My reaction on receiving the invite, first directly from my daughter – then via a whatsapp group – was a mixture of delight and surprise, followed by a giant wobble of uncertainty. Would I be well enough to travel? A mere five months into a gruelling medication regime that knocks out my immune system, I was more than a lot nervous about the prospect of getting on a plane with all those other people in close proximity, breathing on me! 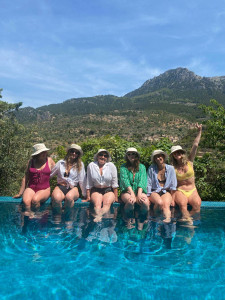 I aired my concerns with my daughter and she, in her steady, calm and loving way reassured me that yes – she wanted me to be there and no – I wouldn’t be the limiting factor, dampening their fun. And yes – they were relaxed about doing everything alfresco and taking lateral flow tests and generally helping to keep me safe and well. I was overcome by their generosity of spirit, even at this early point in the adventure. I made a silent pact with myself to lift my head well above the parapet I’d erected and to make the most of what promised to be a wonderful break.

The planning started in earnest, led by my daughter’s best friend – a capable, clever, sassy and resourceful young woman with enough energy to power a small city and support a one year old baby. I marvelled at her vivacity and freshness – was I ever like this? I’d like to think that I was but it seemed like a lifetime ago.

The group shared links to a gorgeous air b’n’b in Deia, where we would stay for five days and which we had to keep a complete secret from my daughter. I loved the subterfuge! As well as the being a part of a gang of females, exchanging messages about the suitably fun and, of course, bijoux experiences that we planned to have.

By the time May arrived, I was buzzing with enthusiasm and excitement. I was going to be travelling solo as others were coming from different points in Europe and work schedules meant flying at different times. I won’t lie – I was terrified at the airport. So many people, so few masks. I found myself a cuppa and retreated to a space as far away from the throng as I could get. 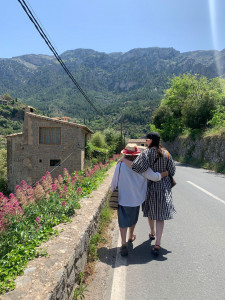 Once the plane had landed in Palma I had calmed down and managed to re-gain a bit of perspective. I was greeted by one of the friendship group who, at the time, was living and working in Majorca. Our conversation was easy and light, flowing as if we’d known each other for years. I hadn’t expected to find such a connection and was delighted by it. We waited for another member of the group to arrive and she too chatted to me as if to an old friend. I felt so included and it was just lovely. I had been tucked away in a very small bubble since the pandemic hit and emerging this way, with these young women was turning out to be a joy.

Our taxi journey took us through the gorgeously craggy and dramatic countryside of Northern Majorca – a far cry from the tourist beaches and bars of Magaluf. We arrived at our mountainside villa, with a short food shopping stop en route, and set about preparing a welcoming meal for the others, moving easily around one another as we laid tables, opened wine, juiced fruit and made a feast.

The shrieks of joy that rang out into the dusk as my daughter was escorted around the villa and its glorious gardens is a sound that will stay with me for a long time. The energy uplift in that moment was so palpable and positive and I think, right there, is where I fell a bit in love with these young women. The days that followed were joyous. We shared food, talked endlessly, climbed over rocks, swam in the glittering sea, sailed, danced and held one another in such a loving and lovely space. We shared our stories and we laughed and cried. I felt so alive and engaged, enjoying conversations and insights into lives very different from my own.

And yet I could see some of my younger self in them and when, one afternoon – we sat in the sun dangling our legs in the pool and drinking in the scenery – I asked them all to take a moment to appreciate just how beautiful they all were. I know how sometimes as younger women we don’t always see our beauty, strength and worth at that time, not realising until we are much older and looking back just how damn good we were!

Those few days were a celebration of beauty, love, life and friendship and a turning point for me as I progress on this journey of healing. I gained a lightness of being, gifted to me by these younger women through their kindness and curiosity. I felt a little more like ‘me’ as they loaned me some of their light. I removed the armour plating that I’d been wearing these past couple of years and I took a chance.

Their invitation to join them and their lack of preconceptions about what I would or wouldn’t be able to do was thoroughly liberating for me. I was simply invited to be, to join in, to enjoy, and to be myself. I watched them extend that acceptance to each other; to enable, embrace, celebrate and give space to one another. It made me reflect upon and give better attention to the relationships I have with other younger people and I’ve been learning from that.

I’ve learned a little more about balance in life from those who have decided to live and work in a much more forgiving and life-affirming way than I ever did. I’ve learned about appreciation of what is good in life that only comes from the experience of precariousness and not being able to take things for granted.

I’m not saying that these attributes are exclusive to the younger people I know, many of my peers have come to the same conclusions about life but it does seem to have taken us a fair bit longer to get there.

Mischief-making elements of society often try to pit the generations against one another. I say, loud and clear, resist! Don’t ever discount the possibility of friendship and camaraderie on the basis of age. We all have so much to offer each other.