However before I could get to the computer keys, I read about endurance swimmer, Diana Nyad’s memoir – Find A Way: One Untamed and Courageous Life, came out last Thursday on Pan Macmillan – and was compelled to write about what was touched in me not just by her feat, but by her bloody-and-be-damned attitude to ageing.

Oh, what a razzle dazzle of a woman. Beyond belief. First of all – the feat. At the age of 64, Diana Nyad swam unassisted from Cuba to Florida. That is 110 miles through seas infested with venomous deadly box jellyfish and sharks for 53 hours without a rest. She was the first person to do it. That is phenomenal.

But before that were the amazing amount of failures. Which make her feat even more incredible. Nyad was one of the world’s best endurance swimmers in her 20s. She’d attempted this swim at 28 in 1978, failed and given up. Two years later, she retired. At 60, she decided to try again. Spurred on by her mother’s death.

And she failed and failed. Stung by box jellyfish, stopped by an asthma attack and more. Her friends who were very involved as back up, begged her to give up. She refused. She had a silicone mask made to protect her from these jellyfish because ninety percent of the people touched by their tentacles die. She was stung but didn’t die. After all her unrelenting tenacity, she actually did succeed at 64 in 2013. Hallelujah!!

What I love about her attitude to ageing is recounted in her memoir. Someone suggested at one of her talks that she was too old to attempt this swim. She is still incandescent about this kind of ageism. Even now. “Age, gender, nothing should be a barrier,” she insists. “I’m not 25, I’m not 45, I’m 66 and I can’t do anything about cosmetic ageing. I look in a mirror and of course my face is going to show the years lived. Same with the body. I carry more fat than I did when I was younger. What am I going to do? Worry about that? Talk about not being in the moment! Any moment I spend fretting that I’m not younger, it’s just a waste.”

She then informs the Observer journalist – the piece that inspired this one – Carole Cadwalladr that the photographer had just enquired if she’d prefer to change positions to a more flattering angle. She erupted with the sort of fire spirit that we admire at Advantages of Age. “I couldn’t care less,” she insisted, “It’s what I do and what I say, and how I live that’s important, not how I look. My looks aren’t my issue and it’s just very freeing.”

Okay, I’m not quite there yet. I still do care what I look like and what photographs of me are like. But I’m 63 and I am beginning to understand the breadth of the freedom that comes with ageing. That I can make choices based on what I want to do, rather than what society, the media or even what my tribe dictates. I can be my own dictator. In the last few years, I have grown my hair long again. The convention is still that older woman shouldn’t have long hair, that their faces will sag and disappear into the hag look. I cut my hair into a bob when I was 43 somehow persuaded by conformity. Pushed by a boyfriend. At 60, my desire for lengthy tresses returned. So I allowed myself the luxury of length. Hair is a sensual pleasure and there is a be-quiet-sexuality message in the obligatory cutting.

No, I’m not about to swim even across the local Grand Union Canal but Nyad’s message around ageing feels supremely loud and clear. Don’t be cowed by comfort zones (your own) or limits (your own). And find your voice, live your life. Be free. Which doesn’t have to be narcissistic.

One of the freedoms I have reclaimed recently – is the freedom to speak my mind politically and to go for the edge. To not be afraid of showing that I’d like a radical change in society, that years of Thatcher, Blair, Brown and Cameron had silenced my anger against the inequality we live with. But no longer.

A few weeks ago as I stood in Parliament Square shouting: “Shame on you” at the Blairites who were trying to bully the Labour Party leader, Jeremy Corbyn – who is committed to social justice and a much fairer society – into stepping down, I felt totally inspired about this kind of potential change. I also imbibed the unity and strength of 10,000 people coming together in 24 hours via social media and in being there together. This was no rag bag of ultra lefties, this was a huge crowd of ordinary people who wanted something better and were willing to get out on to the streets and demand just that.

It was electrifying and inspiring to be part of truly going for something bigger that I believed in.

You can read an extract from Diana Nyad’s memoir – Find A Way: One Untamed and Courageous Life here.

We’d love to hear from you what you’ve found freeing about getting older… please tell us at info@advantagesofage.com 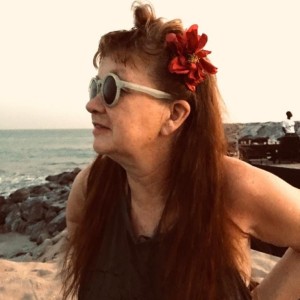