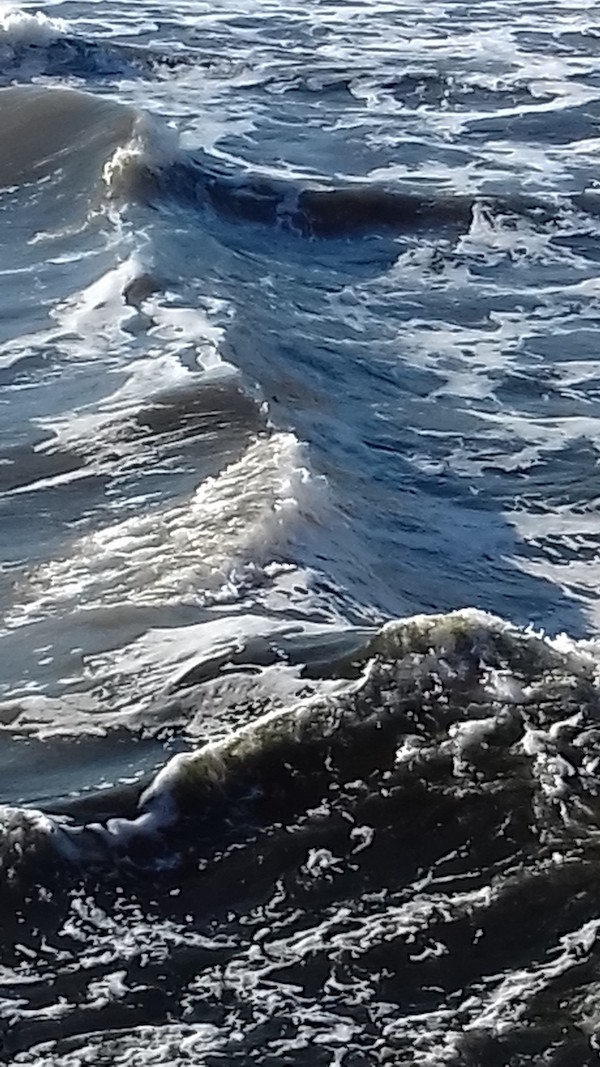 I’m still on the edge, and not often there, as yet. Yesterday is only the second time I’ve had an encounter with the menopause. The first time was two years ago, when I didn’t have my ‘bloody days’ for three months in a row – after which I wrote the ‘Celebration of the Circle’ poem, published here at Advantages of Age – and the second time is now. Now is when the blood is still not coming. I’ve been waiting for my period after what I thought were typical premenstrual symptoms. It’s that strain and unnerved-ness, which ends when the period begins.

Period-experience had taught me that when blood comes, the tensions cease. It’s just that I had not been as conscious of this relationship as I am at this moment when it’s not here and I am still waiting! I have realized that it’s the blood-flow which actually brings healing to the body. The sight of the blood signals the transition from the lowest state of ‘ebb’ back to ‘flow’. So one can say that there are tides inside the body, and for a long time in a woman’s life it’s our blood-flow, which enables the flow of things – and we go with it! We all go with it, we all ‘go with the flow’, when we are at ease! So our period enables and teaches us this.

Flow, tide, ebb, flow, ebbflowebbflowebb: I think that as women, as long as we flow, we are like rivers. When we stop flowing, it might be because we have reached the sea. All rivers, as we know, flow into the sea! So we will all get there eventually.

There are tides by the sea as well, of course, and even more obviously so – tides in a river are more likely to be overlooked than they are by the sea – and it matches how we, as women, are overlooked; and also how we, as women, neglect the significance of our tides, our periods. Sign of the times, sign of the tide, precisely, it is! Period! We are Zeitgeist! We are time and space, within!

Once we flow into the sea, we merge with a greater body of water, and merge with the oceans, a taste of greater expansion. But this body of ocean is not a male or female body, it’s universal. So the ocean is both male and female (and ‘other’ too, as the sea is fluid!). More evidence that the sea is not just male is that it ‘answers’ to the moon. So it’s another aspect of us, and of us all!

A gender-politics note of caution: I do not consider this to be a ‘women and nature’ story: rather it is about ‘geography and the body’. It’s embodied psychogeography.

Psychogeography is, traditionally (though it’s at odds with ‘tradition’!) a radical/alternative/ transformative exploration of urban (and non-urban) environments. It developed around the Situationist International, highlighting the constraints of capitalism on our life-experience, space, place, time, boundaries. It’s about us and space then – landscape, and the effect that has on us: what industrial landscapes do to us, or housing, urban planning, coastal edges, and more. And in this tradition too, I have looked at my body in itself as a geographical space, and what our bodies do to us, and what that means.

I think traditional cultures often say that rivers are female, and the ocean is male – though some rivers are male too. My experience echoes the idea of women as rivers, to start with, though. This leaves more space for gender ‘fluidity’ as well. How would you write a male version of this? I am curious to hear other interpretations and experiences, with perhaps other ‘elemental’ immersions and configurations.

So my geo-spatial body experience (and my choice of elemental signification) is that I am not in the sea yet, but I have reached the river-mouth, I am still on my way to the beach, and happily taking my time, doing loops and turns rather than moving in a straight line towards the sea. But despite all of my twists and turns: the menopause is not too far off – the sea is out there! As of now, my period will most likely come back again – rolling down the river!

There’s one more thing I realized from this experience of period-intermission: the idea that the onset of the blood, as long as it comes, brings healing. It’s healing because it brings about a release of that premenstrual tension in the body, signaling that body is ready for another cycle-turning. What blood can do! And that makes me think of Christianity in an inverted way. The church uses the symbolism of blood as a means of healing, during communion. The way the church sees it, however, seems taken out of context. From my experience here it’s a woman’s blood that brings healing, not that of Jesus – unless, of course, Jesus was a woman! And that now, seems more and more inevitable to me.